Movie Trailer of the Week:
Taken 2 – In theatres October 5th, 2012
http://youtu.be/VpaT8NzkLgE?hd=1
Need I say more, then this is the sequel to the film that gave us this legendary quote:
“I don’t know who you are. I don’t know what you want. If you are looking for ransom, I can tell you I don’t have money. But what I do have are a very particular set of skills; skills I have acquired over a very long career. Skills that make me a nightmare for people like you. If you let my daughter go now, that’ll be the end of it. I will not look for you, I will not pursue you. But if you don’t, I will look for you, I will find you, and I will kill you. ”
And who doesn’t want to see more of Liam Neeson.
P.S. Same plot as the first one… basically.

Video of the Week:
Tinker vs. The Caterpillar

I shot this one, and it’s my doxie… what else can I say. 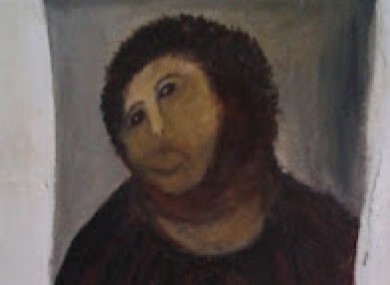 An elderly parishioner took it upon herself to restore 100+ years of moisture damage to ‘Ecce Homo’, and the results were, well, shall we say a little shocking… Except to the internet, who have adopted it as it’s newest meme.

Awesome Software of the Week:
Planetside 2
http://www.planetside2.com/
The long awaited sequel to one of my favourite MMO‘s is now in closed beta. Planetside is one of the only MMOFPS games ever, and probably the most popular. I was a big fan of the never ending combat, and the ability to jump online, run around for as long as I wanted, and then just leave… something that is hard to do in other online games that require, among other things… RAIDS. I can’t wait for it to come out, or when I finally get my beta invite… and best of all, it will be free to play!