Universal Soldier: Day of Reckoning – In theatres November 30th, 2012, Has already been screened at the Toronto International Film Festival.
http://youtu.be/dcTHIB7GfCM?hd=1
Jean-Claude Van Damme and Dolph Lundgren reprise their roles as Luc Deveraux and Andrew Scott, this time leading an army of Unisols without government oversight, weeding out the weak and constantly testing their strongest warriors in bloody, life-and-death combat. One of the most brutal entries of the series to date, it works as a sequel for long time fans, or as a stand-alone film for newcomers to the series.

Endeavour was the last shuttle to be transported to it’s new permanent home, the California Science Centre in Los Angeles, CA. It was transported across the US about Shuttle Carrier Aircraft No. 905, a modified Boeing 747. This is video taken from one, if not both of the chase planes, and includes numerous famous sights in the LA area and a few fly pasts at LAX before finally touching down.

Zidane’s famous World Cup headbutt imortalized as a statue.
http://www.cbc.ca/news/offbeat/story/2012/09/26/zidane-head-butt-statue-paris.html
What is probably the most memorable moment of the 2006 FIFA World Cup, where Frances star midfielder Zinedine Zidane headbutted Italy‘s Marco Materazzi after being insulted numerous times, now has another permanent monument… besides the countless videos and meme’s on the internet. 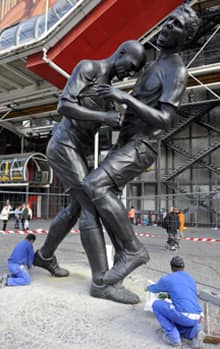 And of course, the video:

Kijiji Ad of the Week:

http://toronto.kijiji.ca/c-cars-vehicles-cars-trucks-Ariel-Atom-2-SC-street-legal-only-one-I-know-of-in-Canada-W0QQAdIdZ374533463
Want! The Ariel Atom is an amazing little car, and it’s road legal. It’s famous for being that car that distorted Jeremy Clarkson‘s face, and for the 500 model being the fastest road legal car to go around the Top Gear test track, with a time of 1:15.1.
Here’s the Top Gear review of the car: